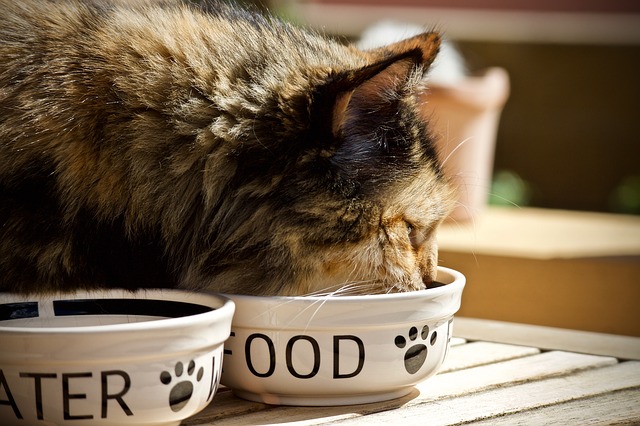 Abound was launched back in 2014 as a pet food brand belonging to Kroger. It’s marketed as being flavor, preservative, and artificial color-free, which means that it hugely speaks to consumers who want to offer their feline companions something a bit more natural (especially compared to other food brands).

The majority of Abound ingredients are sourced in the USA, but there are some that can come from other countries since the company isn’t really straightforward about this detail.

In this Abound cat food review, we’ll look at some of the most popular varieties available today, their safe and potentially unsafe ingredients, and why they might or might not be a good choice for your feline friend.

As a higher carb alternative, we believe that this cat food addresses the needs of cats who aren’t in danger of becoming diabetes – young and healthy cats can eat this variety without developing any health issue.

The food contains deboned salmon as its main ingredient, but we didn’t find any information on whether it’s farmed or wild-caught. The second ingredient of this option is chicken meal, and the others are turkey and salmon meal.

What seems to be problematic about this product is that it contains oatmeal. While its brown rice content is less dangerous to cats, oatmeal really isn’t species-appropriate, and the fact that it also contains barley as a third grain ingredient doesn’t make it better.

As for the fat content, it mostly comes from animal sources. Peas and potatoes are some other ingredients that you will find listed on the label of this product, and they are slightly less problematic compared to oatmeal and brown rice.

It’s also worth noting that the food does contain some natural flavors, but it mostly comes from hydrolyzed animal tissue. If your cat has been having digestive problems, you might want to try this product since it contains both prebiotics and probiotics. It’s also fortified with vitamins, minerals, as well as amino acids.

We do not recommend this cat food for cats that have diabetes, that should lose weight, or that have to avoid starch for any reason. It is a decent and budget-friendly option for adult cats that are healthy.

RELATED:  What to Feed a Kitten

This is another recipe by the brand. It’s been formulated using real chicken as its main ingredient, but it also contains peas, brown rice, as well as carrots — much like some of the other varieties that we have showcased here. While it is generally well balanced, it could have done without the brown rice.

The ingredients are natural, and the best thing about this product is that it doesn’t contain any preservatives, artificial colors, or fillers.

The company says that the brown rice content is essential when it comes to providing your cat with the necessary fibers, but I will argue with this by saying that fibers can come from other healthy sources such as pumpkin or sweet potatoes. Sure, these two cost more than rice, but they are far healthier (or should I say, less dangerous?) than brown rice.

While some say that the pea and carrot content offer antioxidants that can protect and promote your cat’s immune system, I wouldn’t go as far. Yes, it’s a good idea to have your cat food as varied and well-balanced as possible, but cats are still primarily carnivorous, which means that they can perfectly live without the addition of vegetables to their diet.

We will give it some credit since it seems to help control hairballs and aid the digestive system of some cats who have digestive distress. Plus, since it doesn’t contain any artificial ingredients, it is slightly better compared to others.

As a drawback, it’s to be expected that some cats don’t like the taste — but as you know, this largely depends on the cat’s preferences.

Most cats loved wet food, and for a good reason, too. Food brands have to be a little more careful about the ingredients that they use because cats can feel whenever there’s a fishy component that they might not like.

The main ingredient in this product is salmon, but it also contains chicken, chicken liver, as well as fish broth. The chicken liver is a nice addition, especially since the brand states it so obviously. Some companies use the generic name of ‘animal organs’ or ‘organ meats,’ so there’s no way of knowing whether they use the stomachs or intestines or the actual organs such as the livers or kidneys.

The food contains dried egg (and dried egg whites), which I’d argue is a good addition since it also contributes to the higher protein content and is pretty much harmless compared to other types of ingredients.

However, the food is thickened with guar gum and potato starch, and these two ingredients really aren’t worth writing home about. Other than that, the food does contain minerals, vitamins, as well as amino acids, which means that at least from a nutritional standpoint, it is complete.

It has moderate levels of carbs and fat, so it speaks to the needs of cats who have a normal weight.

Pouches can be a great option for cat parents who’ve noticed that their feline buddies tend to avoid eating the remaining canned food after the can has been opened. I have this problem with my own cat and I prefer feeding her pouches for that specific reason.

The main ingredient in this option is salmon, but it does contain sweet potato for added protein. I was honestly relieved to see sweet potato instead of regular potato as it is much healthier for cats, even though it’s not exactly species-appropriate. You certainly wouldn’t see a wild cat munching on some sweet potato outdoors.

The food is well balanced and nutritious, which means that it speaks to the health requirements of your cat. It’s also quite palatable and easily digested since the pieces are small and relatively tender.

We might even argue that it makes a good choice for cats that have lost their teeth. While it does contain moderate amounts of carbs and fats, meaning that it’s not the best for diabetic cats, it does offer good results for cats that have a hard time digesting their food or that suffer from an upset stomach on a regular basis.

If your cat tends to eat just tiny amounts of wet food, I’d suggest keeping this in the fridge and then heating it up in a glass of warm water (while keeping the contents of the pouch inside, of course).

Another option that you should consider is the turkey choice by the same brand. It contains soft and tender turkey pieces that most cats seem to enjoy munching on. With turkey as its main ingredient, it can be a good choice for cats who have a bit of a hard time digesting food and that have to receive lower-fat options.

The high protein in this variety helps your cat get leaner muscles and an overall strong body. On top of everything, the food is enriched with antioxidants so that your cat doesn’t develop food sensitivities over time. Antioxidants are also capable of promoting a better immune system which can come in handy later in your cat’s life.

What’s worth noting about this product is that the pouches are resealable. This means that you can keep them in the fridge without worrying about the chunks becoming too dry and less palatable.

Being easy to serve and rather healthy, we say that this option is worthy of your consideration, especially since it is better compared to others in the same price range. Keep in mind that this option does contain vegetables, however, which are not species-appropriate, so most cats aren’t going to eat them.

Periodontal disease and stomatitis are some of the most difficult health conditions that cats can develop. They are very hard to treat, and you should be careful to try and clean your feline friend’s teeth as possible so as to remove tartar buildup and any bacteria that could cause problems later on.

The treats by Abound use roasted chicken as the main ingredient. The treats can clean your cat’s teeth, but they aren’t going to save you the effort of brushing your cat’s teeth once in a while. If she doesn’t seem too keen on the idea, it might be a good idea to take your cat to the vet’s office regularly so as to get a medical teeth cleaning procedure done.

The treats have as much as 30% crude protein, so they work with most cats in any life stages. Additionally, you might want to know that the pouches are re-sealable, so you don’t have to worry about their crunch disappearing after a while.

Most cats aren’t going to refuse these, but there are some that might not be interested in the chews at all.

This is pretty much the same product as the one that we listed earlier, but the thing that makes the difference between the two is the salmon ingredient. The treats are sold in packs of three and are resealable, which is a net advantage.

Like the other options that we have showcased here, these treats are also capable of cleaning your feline buddy’s teeth. They remove plaque and tartar, although they aren’t a good substitute for a real teeth-cleaning session.

What’s nice about them is that they don’t contain any wheat, soy, or corn, and so they are nutritious, but also safe. Some of the people who have purchased this option say that their cats love it so much that they might even try doing backflips when they hear the sound of the bag in their guardian’s hands.

These are far more affordable than other cat treat brands that we have come across, so give them ago if you are on a tight budget. Due to their salmon content, they work best for cats that have allergies, too.

According to multiple sources that we have found, this cat food brand was recalled just once, back in December 2018. This was due to potentially elevated levels of vitamin D, which can be quite dangerous to pets, and that can cause significant health complications.

The recall affected just one Kroger location — that in Louisville, Kentucky.

The goal of the company is to create better quality pet food that doesn’t contain suspicious or potentially dangerous ingredients. The brand prides itself with its commitment to quality, and we couldn’t help noticing that some of its wet cat food is actually a pretty good option.

The food contains low carbs compared to others, and there are no harmful ingredients in it, such as artificial colors or others. If you tend to shop at a Kroger family store, this one might be a good option, especially if your cat thinks that it’s palatable. You can also find it at various other online marketplaces.

There are some varieties where we could have seen better ingredients. Most of the dry food by Abound can do without potatoes, brown rice, oatmeal, or anything else that might provide unnecessary carbs to your cat.

However, the nutrition available in the brand’s wet food is more than decent, which means that you can give it a go if you have an adult cat that’s clinically healthy and that tends to spend time outdoors and get lots of exercise.

Luckily, none of the foods or treats showcased here contain any artificial ingredients in the lines of fillers, preservatives, and artificial colors. So, generally, this is a relatively safe cat food for cats of all ages.