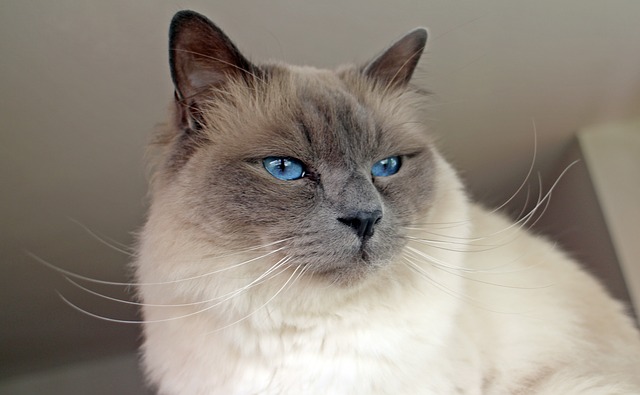 I will start this post by saying that I am one of those lucky cat guardians whose feline friend doesn’t want to go outdoors at all. I live in a building in a one-bedroom apartment (5th floor), and I’m grateful that my cat is happy and healthy and that she doesn’t seem to need more space than the one that she already has available.

Note – I do not live in one of those apartments that cost a fortune and that you can’t keep pets in, such as those in New York City.

Before the cat I have now, I picked up a stray kitten back in 2015, and she was obviously not accustomed to living in an apartment building. She had way too much energy for me, constantly wanted to play, constantly attacked me while I was walking through the house, and kept trying to find entertainment by going into every little place and “re-organizing” everything.

I merely fostered that cat and quickly found her a family who had a house with a yard. She’s just as energetic today but way happier, since she has friends like chickens and other cats and she’s well taken care of, but given the freedom that she needs. I had her for a month before I found her a family.

It would have been a challenge for both of us to live together indefinitely, especially because I didn’t have enough time back then to actually be a cat guardian. I will never blame or hold a grudge against a cat simply because she loves being in the great outdoors more than she would ever like being cooped up in an apartment.

But I will admit that having a cat like the one I have now, that I love unconditionally and that I am eternally grateful for, makes things a lot easier for both of us.

So that’s why I decided to make a list of some of the breeds that are best suited for living in an apartment. I do not support breeding, however, but if you are to get a cat breed, you might as well get one that best matches your personality and living space.

Before I move on to the actual breeds of best cats for small apartments, I’d like to note some important factors that you should consider before buying or adopting a cat.

Your place needs to be as cat-friendly as possible. Fortunately, cats don’t tend to get in as much trouble as dogs, meaning that they aren’t going to swallow your engagement ring, your shoelaces, or even a whole buzzing toy.

But there are some things that can endanger their health, such as toxic plants that you should never keep in a cat’s proximity. Do your homework before bringing a cat into your environment.

Most people nowadays have hectic schedules, and it’s often very tedious to have to go home and play with a pet when you’re tired, and you’ve had a hard day. But it’s part of the job of being a good pet guardian, so everyone has to do it.

While cats cope with loneliness a lot better compared to dogs, there are some that can be clingy, and that can suffer a lot mentally if you go away and leave them on their own for even a day or two. Spend as much time during the weekend with your cat as possible and make sure you play with your feline companion at least 10 minutes every day. They’re just 10 minutes, after all.

Some cats are social and can have a personality that’s more characteristic to that of a dog rather than that of a feline. On the other hand, there are cats that are low energy, slightly disinterested in humans, and that know how to care for themselves with just some basic things on your part (such as good food and fresh water). Which one’s the right one for you?

Good cats for small apartments come in all shapes and sizes and have different personalities, but they all need the same things. Your love and care. Pet care costs a pretty penny, especially in North America, and if you don’t get pet insurance and your cat gets in trouble, you might even end up in debt.

Make sure your cat is vaccinated and dewormed on a regular basis. Keep an eye on your cat’s behavior to notice any changes. Cats are excellent at hiding illness.

Finally, I’d like to add that you should look for apartments for rent that accept cats if you’re planning a move to a city, for example. Hiding the fact that you are a cat parent from the landlord can be dangerous (and it’s most certainly immature). You might even end up with a lawsuit.

You wouldn’t think that when looking at their size, but Maine Coons are among the sweetest cats. Plus, they don’t tend to make a lot of noise, they’re mostly calm, and they aren’t going to damage your home.

Due to their coat, they do need a little more care compared to others, but you can usually do with regular weekly brushing. Maine Coons are quite affectionate and are known to give you headbutts or facebutts on more than one occasion. Plus, they have a habit of being very loyal, and they tend to bond for life to their owner.

The best thing about Scottish Folds is their temperament. They are very calm and might be found taking a nap rather than investigating whatever place they haven’t gotten into in your home.

They are also easy to train, but they don’t like to be alone. A Scottish Fold appreciates routine and can become stressed if anything significant changes in their living space. Like Maine Coons, they don’t have any interest in chewing on or damaging anything out of boredom.

If you care more about getting a quiet cat as you don’t want to bother your neighbors, the Abyssinian is the right cat breed for you. Not only is this breed breathtaking, but it also just trills or chirps instead of yowling or meowing.

However, Abyssinians love to play, and they will grab any opportunity to do so. They can also learn tricks. This is a breed that’s comfortable with families with kids or other cats so long as they have someone to play with.

As uncommon as they might be, Birmans are beautiful and easy to groom. Even though they are fluffy, they don’t have an undercoat, so they require less care compared to others. They are social, though, so they’d much rather be owned by a person who works remotely rather than someone who leaves from the house for 10-11 hours a day.

Persians are among the laziest cats on the planet! They love napping, and they love to snuggle, which means that they make the best option for people who love to be quite affectionate with their feline companions. A small apartment is the best type of living space for a Persian as this breed tends to get a little anxious in a large and busy environment.

Not only is it one of the most beautiful cat breeds out there, but it’s also one of the most laid-back ones, too! The Ragdoll has a sweet temperament, is very cuddly, and doesn’t seem to want more than love, which is why the breed is also known as the ‘lap cat’. It’s like whenever you hold a Ragdoll, she dissolves in your hands and becomes liquid.

Russian Blues are a little standoffish, which might not make them the best companions for all types of cat guardians. However, they are affectionate when they feel like it, and they’re way easier to care for due to their short fur. Like Maine Coons, they tend to bond with one person for life.

Are cats a good pet for apartments?

Of course! They’re easier to care for compared to dogs. You don’t have to take them outside at 5-6 am to allow them to ‘go to the bathroom’. Some of the breeds showcased in this post don’t even have to be taken outside, ever, although the social ones can be, with a harness and a leash.

Sure, there are pets that require less maintenance and that might make even better choices if you live in a small apartment. These range from hamsters to pet fish — but they’re nothing like what a cat can give you if you’re a cat person, right?

In my life, I’ve had all sorts of pets – from budgerigars and finches to hamsters and pet fish, but I’ve always lived in an apartment and could never imagine being a dog parent — not because I don’t like dogs. I just wouldn’t be able to give a dog the right living conditions and care in my situation.

Ideas for cats in small apartments

If you tend to work long hours, but you still want a cat to cuddle up with at the end of the day, there are some things that you can do to prevent your cat from getting bored. You can use interactive toys, get two cats instead of one, or provide them with a variety of things to scratch on (such as cat trees, for instance).

Make sure that your cat always has access to good food and fresh water, with the water being extremely important. Cats are prone to UTIs and a variety of urinary problems specifically because they don’t drink a lot of water, but if it’s not fresh and clean, they aren’t going to drink any.

If your neighbors are noisy and your cat tends to get scared easily, make sure that she has a safe space where she can hide. Most cats prefer hiding under the bed if you have the space, but if you don’t, it might be a good idea to get a cat cave.

It’s not just about your living space and demands, after all, it’s also about your cat. Indoor cats are less exposed to cars, predators, fights with other cats, and most importantly, infectious diseases and parasites.

Even if you can bring parasite eggs on your shoes into your home, the likelihood of your indoor cat getting worms is quite slim, especially compared to that of an outdoor cat.