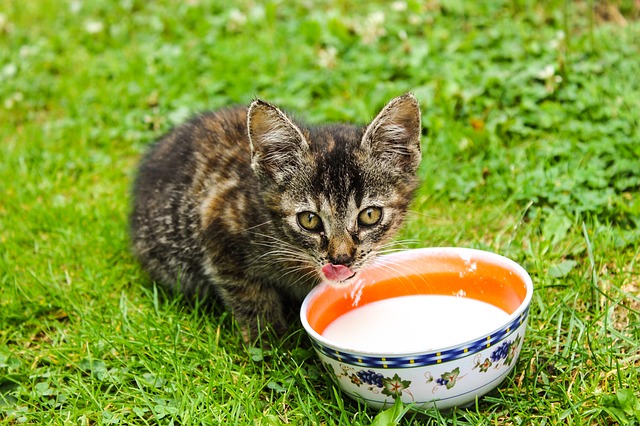 As simple as this question might sound, the answer isn’t as straightforward as you might expect. I personally have written about lactose intolerance in cats before and about why you should try to avoid feeding your feline friend milk or milk-based products. But what about plant-based milk, one of the most popular of which is almond milk?

That’s what I will discuss in today’s article.

As its name suggests, almond milk is a result of crushing almonds and mixing them with water, draining, and then collecting the fluid that remains at the end of the process. Almond milk has gotten a bad reputation in the past couple of years as farming almonds is unsustainable, and it takes a lot of water to grow them.

1 gallon of water is required to grow just one almond and up to 1,900 gallons are needed to grow 1 pound of almonds.

Is almond milk bad for cats?

If you are a cat guardian, you probably suspect that cats don’t just go around munching on almonds, at least not in the wild. Nutritionally, one cup of almond milk contains the following:

Since almond is low in protein, it doesn’t exactly address the dietary needs of cats. It does have a good amount of fat, I will admit that, but those carbs are concerning since ideally, cats should have as few carbs as possible.

On top of everything, many brands of almond milk add things like artificial flavors and sugar to their recipes. I haven’t seen a particular one with xylitol in it just yet, but xylitol is particularly dangerous for pets — especially dogs, so if you tend to purchase any almond milk that has artificial sweeteners, avoid giving it to pets.

So, almond milk can be bad for cats because of the artificial substances it contains (besides the milk per se). It’s not as bad as dairy milk, and it doesn’t contain ingredients that are widely known as being toxic for our feline companions, but it’s not the best option.

However, if your cat does love the taste, you can offer him/her some almond milk once in a while. The amount should be very small (less than one tablespoon, if at all possible). Humans are capable of putting up with the substances in almond milk a lot better also because they weigh a lot more compared to their cats.

I would recommend giving your cat less than one tablespoon of almond milk once a month or even less often than that.

Is regular milk better for cats?

No. To be able to digest dairy milk, cats have to be ‘equipped’ with an enzyme known as lactase enzyme. The truth is that few cats actually have it and the majority of cats don’t produce enough of it so as to avoid developing indigestion.

So then, you might ask, how come kittens rarely have diarrhea after you give them milk? Well, some kittens are far more capable of digesting lactose from cows’ milk compared to adults. They are engineered to handle lactose when they’re young, although it comes from a different species. But adult cats are less ‘effective’ when it comes to doing the same.

What about other types of plant-based milk?

Can cats drink cashew milk? Yes, but it’s pretty much the same as with almond milk, meaning that you have to restrict the amount and number of servings as much as possible. Cashew milk contains healthy fats, vitamins, minerals, and antioxidants, so it’s not that bad a choice. Plus, there are cats that can have an allergic reaction to both almond and cashew milk.

What about soy milk? Cats can have soy milk in moderation. The problem with soy milk is that it has a lot of calories, and it usually contains potentially dangerous ingredients, too, like sweeteners or additives to extend their shelf life.

Cats can have rice milk and coconut milk, also in very limited amounts. Oat milk is a no-no, however, because it does not contain the right nutrients to be healthy and useful for cats.

What health problems can plant-based milk cause in cats?

Indigestion is the most common health issue that can be caused by giving your cat plant-based milk, whether it’s almond, cashew, coconut, or worse, oat milk. Here are some symptoms that you can notice in a cat that’s suffering from indigestion — keeping in mind that cats usually hide illness.

As cat parents, we might often think that cats can have the same things to eat as we do, but this is far from true. Cats are carnivores. Every time you ask yourself whether you can give something new to your cat or not, you should consider that in the wild, he or she would prey on wild birds and rodents — not almonds, oats, coconuts, or cashews.

If you are looking to introduce any new food into your cat’s diet, do it gradually and using small amounts. Don’t give your cat more than a tablespoon of plant-based milk even if he/she doesn’t seem to be allergic or show any digestive distress following ingestion. It’s better to be safe than sorry, in this case.

Here is some information on milk replacers good for cats.

0 comments on “Is Almond Milk Bad For Cats?”