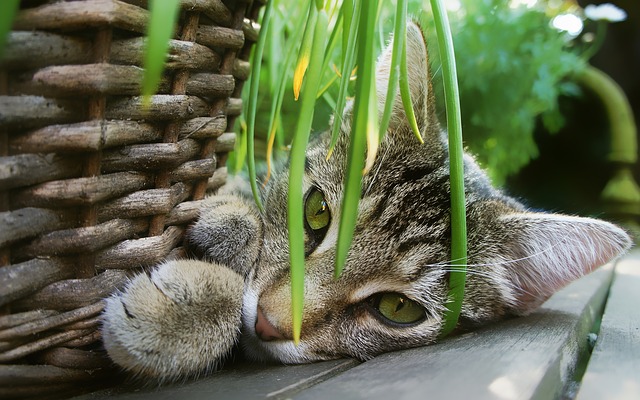 How good is turmeric for cats? Is turmeric poisonous to cats? Can you use turmeric for worms in cats? We’re answering all of these questions and more in today’s post, so keep on reading.

Turmeric for Cats – an Introduction

Turmeric is a herb used in oriental cuisine and alternative medicine for hundreds, if not thousands of years. It’s a spice that commonly shows up in Ayurveda practices and other holistic healing customs.

But turmeric is one of those herbs that has a fairly low number of studies even in people, so my opinion, as a former veterinarian, would be for cat parents to do as much research as possible before deciding to use it on their pets.

One thing I have to note right off the bat is that turmeric for cat wounds is a bad idea in itself as cats groom their bodies, so they will ingest the herb.

I’d argue that the only form of turmeric that is safe for cats is the oral version, so long as it contains fairly low amounts of the essential ingredient (curcumin) and extremely low amounts of pepper.

Is turmeric good for cats? Well, in some cases, it can be. In dogs, turmeric provides a number of important benefits, mostly relating to its anti-inflammatory properties.

So it wouldn’t be far-fetched to assume that it might have the same effect on cat health. As such, it could improve inflammatory conditions that are chronic, such as arthritis, for example.

It can also provide pain relief in some conditions, including in cats with cancer. However, that does not mean that turmeric products can completely replace medications such as for parasites, bacterial or viral infections, or fungal infections.

Some so-called studies also suggest that curcumin has anticoagulant and antiseptic but also antioxidant properties.

But you should take these statements with a grain of salt, especially since not enough research has been performed on pets, in general, and in cats, in particular.

Is Turmeric Good for Cats With Cancer? How Much?

Many turmeric product sellers love to claim that curcumin can fight cancer, and the truth is that this is just false.

Once your cat has been diagnosed with cancer, no matter what type, there is no natural medication that will make it go away  — synthetic drugs (chemotherapy), surgery, and radiation therapy are the only types of therapies that can work in cancer, and even these might not be effective depending on the malignancy stage and specific kind of tumor.

There is no spice or herb that can cure cancer. However, that does not mean that a healthy lifestyle, good-quality food, as well as some types of supplements aren’t capable of preventing cancer. And there are studies suggesting that some supplements can slow down the progression of cancer – but not cure it.

Is there a specific kind of turmeric for cats with cancer? First of all, no, most dosages are generic.

But the most important thing to keep in mind is that turmeric can at best prevent some types of cancer… but that’s pretty much all that it might be able to do in this sense.

Can Cats Eat Turmeric? How Much Turmeric for Cats?

While turmeric powders or supplements are almost incapable of hurting your cat, it’s quite unlike that your feline friend will want to eat it independently.

So you don’t have to worry about finding your cat raiding your pantry for turmeric powders, curry, curcumin products, or anything else.

People call this type of concoction the ‘golden paste,’ but unless your cat is immobilized, it’s quite likely that she will want to groom her body, and you have no control whatsoever on how much she eats.

In terms of flea infestations, turmeric can merely act as a very light flea repellent, but it mostly irritates them, so they might look for another host for this reason. However, turmeric is not deadly for fleas, so it will not rid your cat of the infestation.

What about turmeric for worms in cats? The answer to this question is a clear no.

Especially when it comes to potentially dangerous and more importantly, zoonotic (meaning that can be transmitted to people) parasites, you should definitely not avoid using veterinary-recommended antiparasitic medications (dewormers).

These days, some spot-on solutions also have deworming capabilities (such as Advantage Multi), although most vets prefer administering two separate medications – such as Advantage spot-on and a Drontal worming tablet, for example.

You should first ask your vet whether turmeric might make a good choice for your specific pet.

Cats can have particular conditions such as diabetes or chronic diseases such as liver or kidney failure.

Your veterinarian is the best person to give you any recommendations, even in terms of supplements.

If your vet agrees with you giving your cat turmeric and if they feel that a turmeric product might potentially alleviate your cat’s arthritis pain, for example, just follow the instructions from the product’s manufacturer.

Another note that we have to make is that you should avoid getting turmeric products from sources you’ve heard nothing about.

Try to stick to well-known pet brands, but do look at the ingredients of the product, too, to make sure that it contains no artificial preservatives, colors, stabilizers, or any other such substances that might do more harm than good.

Which Is Better for Cats? Milk Thistle or Turmeric?

These are two very different things, so it would be incorrect to say that milk thistle is better or worse compared to turmeric curcumin for cats.

Milk thistle contains an ingredient called silymarin, which is commonly utilized in treating liver disorders in both cats and dogs.

In my opinion, there are many more studies about silymarin in pets than they are about turmeric, so it could be more effective than turmeric.

Silymarin can also be used for reducing insulin dependence in diabetic cats and dogs, so its effects are quite different compared to those of turmeric. Consult your veterinarian whenever choosing between one supplement or the other.

Is Turmeric Good for Cats?

It’s not bad, but it is not a wonder cure for everything, either. If you use it as a preventative supplement, it might just as well work.

But don’t put your faith into it if your cat has been diagnosed with a serious disease.

As good as natural and holistic options might be in some situations, they rarely offer any results in diseases such as cancer or potentially lethal conditions such as infectious peritonitis, calicivirus, or FIV, in other words severe viral diseases.

Veterinary medicine has made a lot of progress in the past few decades, especially in terms of diagnosis and therapies.

Take your cat to the vet clinic for at least one to two check-ups every year. This is the best advice for preventing any cat condition.

Turmeric does have several useful properties, such as providing pain relief and lowering inflammation in some conditions, especially chronic diseases.

However, the rest of the claims or rumors, such as it being effective in treating cancer or being capable of killing fleas or internal parasites, have yet to be proven.

Here’s a good article about why you should take turmeric claims with a grain of salt.

0 comments on “Turmeric for Cats”