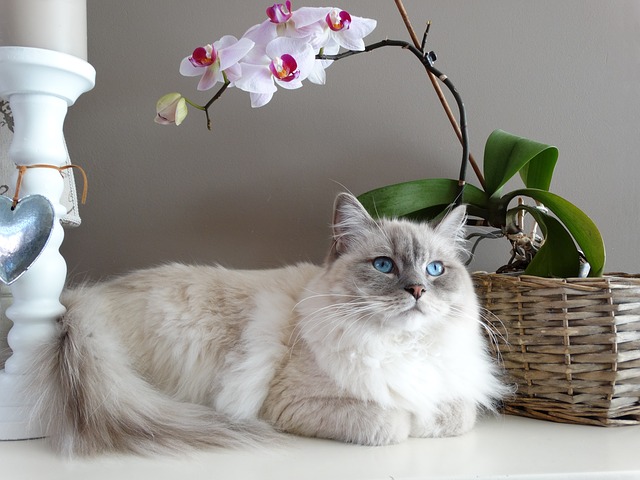 If you are considering becoming a Ragdoll cat parent and you’d like to learn more about this breed, especially the health problems that it might be affected by, you’ve ended up in the perfect place.

Off the bat, I can tell you that the Ragdoll is a relatively healthy cat breed, but there are some health issues that can be transmitted genetically and that this breed is more prone to developing.

Read on to find out more!

This is perhaps the most significant medical issue that this breed can be born with or develop in time.

Ragdoll cats are more likely to develop cardiac conditions, with the most common one being hypertrophic cardiomyopathy.

The worst thing about it is that it cannot be cured completely.

So, if you are the pet parent of a Ragdoll cat that has been diagnosed with the condition, you should know that you’ll have to give him or her medication for the remainder of their life.

What is more concerning about heart issues is that most cats are asymptomatic for a very long time.

This makes the task of telling if something is wrong with your feline friend a very challenging one, especially since cats are also very good at hiding disease symptoms, in general.

Ragdolls that do have hypertrophic cardiomyopathy can show some of the following symptoms, so keep an eye on your cat:

RELATED:  How to Tell What Breed Your Cat Is

While it has not been categorized as a genetic condition, heart health problems are indeed relatively common in this breed, so you do have to consider this aspect before becoming a Ragdoll cat parent.

Polycystic kidney disease is, on the other hand, a hereditary condition. Even though it is considerably more common in breeds such as the Persian or Exotic Shorthair, Ragdolls are also predisposed to it.

Unfortunately, kidney disease is extremely challenging to treat. The organ has a functional unit called the glomerulus and if it gets damaged, the entire kidney becomes nonfunctional.

Some of the clinical signs that you can see in a cat with polycystic kidney disease are the following:

The differential diagnosis should be made with diabetes as it often has the same symptoms.

In the past, Ragdoll breeders didn’t used to be very responsible, so that’s why the condition ended up being hereditary. All Ragdolls that have kidney issues should not be used for breeding.

Ask your breeder for a health certificate issued by a veterinarian which attests that in the past 12 months, the cat has not experienced any kidney or urinary health problems.

If you’re not adopting an adult, ask the breeder for the health certificates of the kitten’s parents.

Urinary tract infections are, without a doubt, one of the most common Ragdoll cat health issues without being necessarily specific for this breed.

In fact, most cats develop UTIs as a result of them not drinking enough water. For this reason, I’ve always recommended pet parents to invest in a good pet fountain or feed their feline friends a diet composed of mostly wet cat food.

RELATED:  Cat Breeds with Big Ears - An Awesome List To Choose From

If you believe that your pet has a urinary tract infection, you should go to the vet hospital as soon as possible.

Time is of the essence, especially in unneutered males as they can quickly develop a urethral blockage and if left untreated, it can lead to death. UTIs can also be developed as a consequence of urinary crystals.

These Ragdoll health issues are typically associated with symptoms such as:

The Ragdoll temperament is perhaps the most important reason this breed has become so popular over the years.

These cats are calm and quiet and they love to laze around the house or in their owner’s lap. In fact, they’re called lap cats.

But this also means that they have a mainly sedentary lifestyle, so they do not get enough exercise.

They definitely do not get as much exercise as their outdoor counterparts, especially since they appreciate the comfort of a well-heated home to that of adventure.

Ragdolls are more predisposed to becoming obese compared to other breeds. While you might not think that this can be dangerous, obesity in cats is quite risky.

Try to spend enough time with your feline buddy every day and play with her/him as much as possible. Playtime is also important for preventing conditions such as feline dementia, which can show up in senior cats.

RELATED:  How Many Types of Cats are There?

If your Ragdoll loves food, get her a slow feeder where she actually has to ‘work’ to get the kibble out of the toy’s structure.

Since their hair is anything but short, the most common digestive issue that Ragdoll cats are likely to experience are hairballs.

For this reason, you’ll have to tend to your Ragdoll grooming routine once every several days.

I personally recommend a tool called ‘Furminator’ as it basically allows you to give your feline friend a haircut while also brushing her coat (so the experience is not going to be an unpleasant one).

I have used many brushes in the past (I still use two besides the Furminator) and none of them have managed to collect enough hair and prevent hairballs as well.

How long do Ragdoll cats live?

What is the average Ragdoll life expectancy? Well, it depends on a number of factors.

A perfectly healthy and well-cared for Ragdoll can live for 12 to 15 years, but it’s not uncommon for some cats to live more than that.

So that is the average Ragdoll lifespan you can expect, which means that when you get a kitten, you’re making a long-term commitment.

1 comment on “What Health Problems Do Ragdoll Cats Have?”