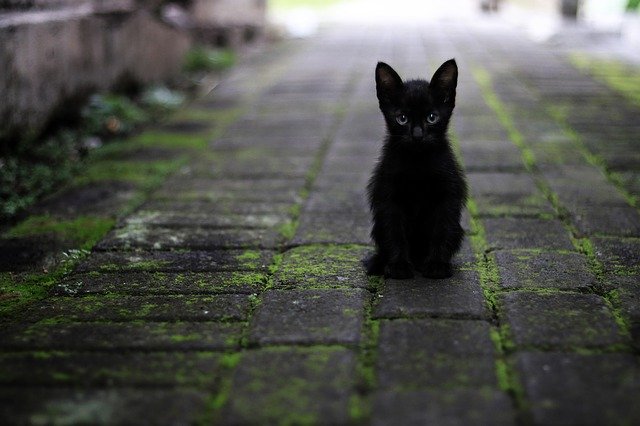 There are so many beautiful black cats out there that have to be adopted, but even now, few of them get the chance of living in a warm and loving home as people are still superstitious about their color.

Why are some people afraid of black cats?

Why are black cats bad luck? From the information that I gathered while doing research for this post, it seems that most people started to fear, avoid, or even downright hate black cats in the Middle Ages.

But what you might not know is that in those times, almost all animals that were black or completely white were discriminated against or thought to have been a sign of the devil. This included black chickens and black roosters, for example, but also ravens and crows.

Unfortunately, black cats were associated with the idea of evil or the devil for many years, up until the late 17th century, around the time of the Salem Witch Trials. Yes, black cats were also considered a symbol of witchcraft, which, as you know, was forbidden.

Both the people who were thought to be witches and the black cats themselves were often found and burned, usually at the same time. That’s horrible!

RELATED:  How to Tell What Breed Your Cat Is

Obviously, nowadays, we know that this is all a superstition as both those individuals who were believed to engage in witchcraft were most likely innocent (and even if they weren’t, their witchcraft surely didn’t have any consequence) and the cats were killed for no reason whatsoever, either!

Not everyone used to be superstitious and frightened by black cats and such was the case with Ancient Egyptians, 19th-century Irish people, and even current-day Japanese.

Ancient Egyptians loved all cats and did not discriminate against any color combination. Irish people used to think that if a black cat showed up on your porch, it would bring good luck with it.

Even now some Japanese think that a black cat is a symbol of wealth and prosperity, and some Chinese people believe that they ward off evil spirits.

Not all black cats have the same behavior and temperament, and the variations between one and the other can be quite large. Some of them are calm and laid-back, while others are known to be full of energy and appreciate an outdoor existence rather than being cooped up indoors.

Some studies suggest that because they have more melanin in their bodies, black cats are less predisposed to developing some medical conditions, including the much-feared FIV.

Are black cats more affectionate? It seems that many of them are, and this is due to their better immunity and less likelihood of being sick in their early life.

They have less to fear as they’re usually avoided by people (including those that might want to harm them), so they’re less wary of being touched or socialized.

RELATED:  How Many Different Breeds of Cats Are There?

What breed are black cats? First of all, there isn’t such a thing as a black cat breed per se as the color is determined by a specific gene. This gene needs to be possessed by both the father and the mother in order for the kitten to turn out black.

So, whichever cat breed you might be the pet parent of, if you want to breed a male and a female, there is some likelihood of one kitten turning out black if they both have the gene. By the way, the black-color gene is a dominant one, but neither of the kitten parents should carry tabby genes — otherwise, the tabby will be the dominant one.

While all cats can be born black, especially since approximately 30% of the cats that exist worldwide are this color, there are some breeds that seem to be more common carriers of the gene.

These are the following:

Other breeds that carry the gene are the Norwegian Forest Cat, the Persian, the Selkirk Rex, as well as the Scottish Fold.

What diseases can black cats have?

Even though word has it that they might have better immune systems compared to their regular counterparts, black cats are still predisposed to a number of medical conditions, many of which show up in all of our feline friends.

RELATED:  What Cats Shed The Most?

In fact, many black cats, especially feral and outdoor ones end up suffering from bad cases of anemia as their guardians rarely have the chance of noticing that they have bad flea infestations.

This is especially true in the thick and long-haired varieties, which make it impossible for people to see traces of the fleas themselves or their feces (which resemble a somewhat brown-blackish dust and could be better discerned on a white cat, for instance).

So, are you ready to adopt a black cat now that you know you have no reason to fear one? 🙂

0 comments on “Why Are Some People Afraid of Black Cats?”