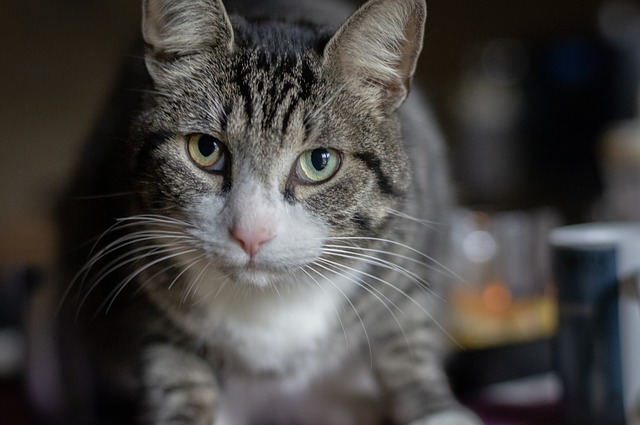 If your cat has been having an upset stomach for a while or you’ve noticed that she vomits or has a bout of diarrhea once in a while, she might be suffering from gastroenteritis. But this isn’t a disease per se — while studying for my veterinary degree, I learned that it is a syndrome, meaning that it’s composed of a number of symptoms.

However, it’s not a disease — it is what happened because of the primary disease. Your cat could have developed gastroenteritis because of a parasitosis, for example, or because of a bacterial infection.

In this post, we’ll look at what causes gastroenteritis in cats, its symptoms, how it can be diagnosed and treated, and what you can do to prevent it.

What causes gastroenteritis in cats?

Gastroenteritis is the inflammation of the gastrointestinal tract, and it usually involves both the stomach and the intestines. It can be something minor, and it can be caused by indigestion, or it can be developed because of serious issues such as infections, intestinal blockages, or pancreatitis.

How do cats get gastroenteritis? First of all, this isn’t (necessarily) a contagious condition unless it is caused by an infectious pathogen. If it’s caused by a bacteria, virus, or parasite that can be passed on from one cat to the next, yes, it is contagious.

However, if it’s caused by indigestion, it isn’t going to affect the other cats living in your household.

Gastroenteritis can be caused by the following factors:

You can’t know for sure which one of these has led to your cat suffering from gastroenteritis unless you take your pet in for a checkup.

The two most common clinical signs of gastroenteritis in our feline friends are vomiting and diarrhea. But as you know, cats can vomit because of hairballs, when you change their food, because they’ve ingested a foreign body while they were outdoors, or from a variety of other reasons.

Your cat will also exhibit the following symptoms:

Most cats are typically lethargic, also because they tend to become dehydrated as they lose water through vomiting and diarrhea.

What’s worth noting here is that a cat with gastroenteritis commonly gets diarrhea several times over the course of a day, so by the end of it, she could be in a bad state. After all, she’s lost a lot of water — and cats aren’t known for drinking a lot of water, which makes matters even worse.

This condition is diagnosed by exclusion, which means that the vet has to rule out all other possible causes and diseases before settling on this one. Once again, it’s not a disease per se – it’s a number of symptoms altogether, and it involves a larger organ being affected.

The vet first has to obtain your cat’s medical history and whatever you can tell them about your feline friend and the things that you have noticed. Your cat will then be examined clinically for signs of dehydration, abdominal tenderness, bloating, or any other aspects that might suggest gastrointestinal distress.

Some of the tests that your vet might need for the diagnosis include but are not limited to:

Not all of these are necessary, but if your cat is suspected of having ingested a foreign body, an ultrasound and an X-ray will be mandatory. The same goes for cases of obstruction or occlusion, as these aren’t visible any other way.

A complete blood count can show the vet whether there is any abnormality in terms of the white blood cell number, in which case the cat might be suffering from an infection.

This type of gastroenteritis should be treated as an emergency. If your cat is suffering from this type of condition, you will notice blood in her vomiting or diarrhea. Taking your feline friend to the vet as soon as possible is critical in this case, as besides dehydration, your cat will also develop anemia, and fast.

A cat with this type of gastroenteritis will usually show signs such as weight loss, low appetite, and either black stools or blood-covered stools. Most cases are idiopathic, meaning that the case remains unknown, but some diseases have been linked to it in the past — such as parasitic infections, immune-mediated disease, and leukemia.

How to treat gastroenteritis in cats

If nothing seems to be at the root of the problem other than a change in the cat’s diet, for example, the cat will receive intravenous fluids and dietary food. If the animal is otherwise healthy, he or she will recover in less than 48 hours.

The prognosis is excellent in cases of indigestion, but it is reserved if the cat has a gastrointestinal tumor or an obstruction.

Tumors of the gastrointestinal tract can be very hard to treat. As you know, cats are particularly good at hiding illness, which means that by the time any symptoms show up and you take your feline buddy to the vet, the disease might have progressed quite a lot.

Some intestinal tumors can be removed surgically, but if the cancer has reached an advanced stage, your cat might undergo chemotherapy simply so she can live longer. It all depends on the type of tumor, the affected organ, malignancy stage, and a variety of other factors.

Healing cats from gastroenteritis is, however, easy if it is caused by indigestion and an infection caught in its early stages.

How long does gastroenteritis last in cats?

Depending on its cause, some cats can recover fully from gastroenteritis in less than two days’ time, but others might have to be monitored for one or two weeks. Some obstruction or occlusion cases can be solved surgically, in which case the recovery time will be a little longer.

As I might have mentioned, cats hide illness, so the first piece of advice that I can give you is to pay attention to any changes in your cat’s behavior, especially in terms of ‘going to the bathroom’ and feeding.

If you want to change your cat’s diet, introduce small amounts of the new one into the old one, and do so gradually. Many cats don’t react well to sudden changes in their diet, especially those that have developed sensitivities over time.

Brush your cat’s coat regularly so that the issue of hairballs is eliminated. Deworm your cat on a regular basis, especially if she spends time outdoors. Make sure your cat’s vaccination plan is on par and take your pet to the vet at least once a year for a checkup.

0 comments on “Does Your Cat Have Gastroenteritis? Warning Signs & Treatment”