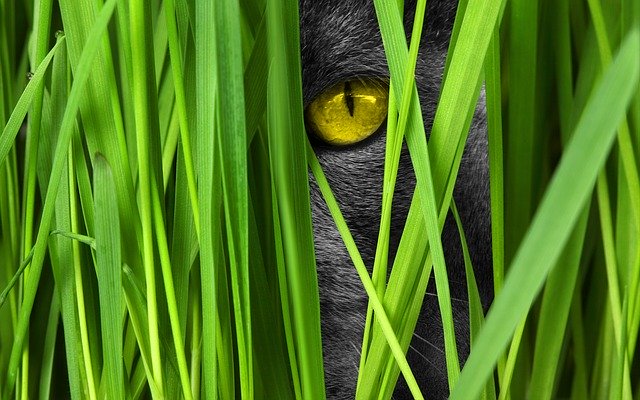 I grew up with a beautiful mixed-breed cat that my parents adopted when I was in 6th grade. With time, that cat ended up staying with my grandparents and having access to a yard — and we made that decision because of a bad habit that he had (he peed in my bed every day, and having marked his territory, there was nothing we could do).

Every time I got to see him, I noticed that he would go outdoors and eat a good helping of grass every morning. In most cases, he threw it up less than an hour later.

The reason I began with this is that, at the time, this behavior seemed a little strange. But I later on found out why cats eat plants and how dangerous this habit can be. I’m going to discuss just that in this post.

Why do cats eat plants?

Cats are carnivores, so it doesn’t make any sense for them to begin enjoying a pasture as if they were a sheep or a goat. In most cases, they’re looking for a different texture, but there is this assumption according to which they have been doing this since the beginning of time to balance their digestion.

Cats’ digestive systems and processes are different from those of our own. We eat fiber because it helps us ‘go to the bathroom’ properly, but cats don’t really need this. They have a far shorter digestive tract because protein can be digested a lot faster compared to a food that has a lot of cellulose.

RELATED:  5 Common Household Risks to Protect Your Kitten From

But sometimes, even cats can suffer from indigestion, and if they feel that they might be mildly constipated, they might want to eat some grass.

There is another theory and it goes something in the lines of this — cats eat grass because it contains a series of vitamins and minerals that can’t be found in meat. I don’t necessarily agree with that, because cats are obligate carnivores.

If you’d like to give your cat some variety, you can always choose different types of protein – fish today, poultry tomorrow, lamb the day after… and so on.

Due to the effects that grass can have on the digestive process, the cat might be able to release some internal parasites more effectively than she could if she were to eat only meat.

This seems more likely, but it supports the general assumption that cats eat grass to regulate their digestion.

Something as trivial as getting rid of a hairball can be stimulated with the help of some grass blades. There are, however, cats that will eat grass, either too much or just any type of plants out of pure anxiety or boredom.

As a cat guardian, you probably know that cats tend to behave in weird ways when they’re bored, so that’s how they might end up nibbling on your power cables, strings, and even tissue paper. So why not grass?

Why you should keep cats away from plants

We’ve written another article about what the plants dangerous to cats are and which ones are safe, so I’m not going to go into that here. But I did want to point out that maybe indoor plants are less dangerous, especially if they aren’t toxic, but at least they don’t contain pesticides or herbicides.

RELATED:  Why Does Cat Poop Smell So Bad?

The grass in your yard or your neighbor’s can be dangerous to ingest by a cat simply because there is the risk of those substances existing in the plants.

As for the effect that toxic plants can have on cats, some of them can cause kidney failure, but also life-threatening heart problems — both in cats and in dogs.  But cat grass can solve the issue if your feline buddy loves eating plants! It’s perfectly safe.

How to keep cats away from plants

This is going to sound disappointing, but if you want to avoid any potentially intoxication health problems in your cat, you should avoid having fresh flowers or bouquets in your home. Lilies of any kind are a no-go because they can cause kidney failure.

Here’s how to keep cats out of plants indoors. If your cat isn’t particularly adventurous, maybe placing the indoor plants on a higher plane is a good idea. My own cat doesn’t have the smallest interest for climbing on the furniture and getting higher – but I know that that might not be the case for all cats.

Another great piece of advice, whether for indoor or outdoor plants, is to use citrus oil or lemon juice, which you could spray on them. Cats hate citrus of any kind, so you can also place the peels around the pots.

Ever heard of a cat that loves pepper? Me either. So sprinkling some pepper on the plants can also make it less likely for your feline friend to want to nibble on them. There are also repelling sprays that you can purchase if you don’t want to bother to create your own, but honestly, I’d recommend the homemade version since it is a lot cheaper.

That should answer your dilemma on how to keep cats from eating plants.

There are some plants that just aren’t interesting for your cat, and they usually consist of palms, ferns, succulents, aloe vera, and other such plants that aren’t ‘grassy’.

The Money Tree is very easy to keep, and so is Aloe Vera. Both of them thrive in the indoor environment and with indirect sunlight, so they can keep being alive even in colder climates. The Rubber Plant is a great option, too, because the leaves are thick, so your cat isn’t going to feel too tempted to nibble on them.

All of these plants have air-purifying properties.

0 comments on “Why Do Cats Eat Plants?”