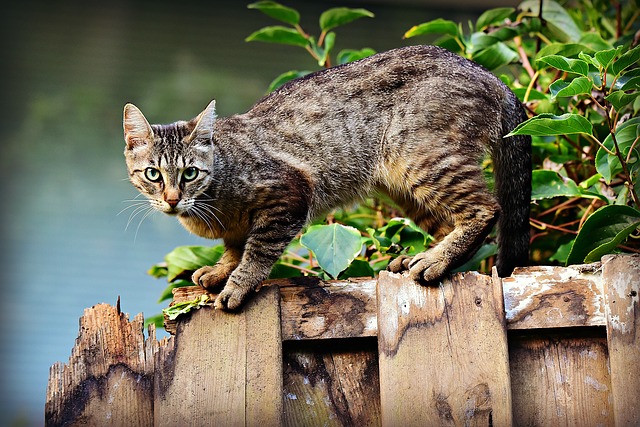 Most of us are aware that a picnic in the woods or a mountain hike can sometimes lead to dangerous situations due to the wild animals that, if are not out to eat us, usually carry diseases or are infested with parasites such as fleas or ticks that carry transmittable diseases of their own.

Another threat we’re usually prone to pin on wild animals are viruses and viral diseases like the one that makes up the subject of this article, Lyme disease, relapsing fever, tularemia, and many others.

We often forget that these viruses and other parasites don’t spread based on the wild or domestic status of an animal, and that it is possible for any cat, dog or other domestic mammal we come across to have such a problem, even those that live in our home. As a cat owner or a cat lover, you should know what are the circumstances in which you are in danger of being infected with rabies.

You are probably aware that rabies is most commonly carried by foxes, raccoons, dogs and bats. The truth is rabies can infect almost all average-sized to big mammals. Small mammals such as mice, hamsters and even rabbits are almost never infected, but scientists haven’t excluded that possibility yet, so neither should we.

Rabies is a viral infection that attacks the nervous system of the animal, going to the brain, causing acute inflammation of it and eventually leading to coma and death. Although it sometimes take a lot of time before the virus is incubated completely, its subsequent evolution is rapid, death occurring at a very short time after the symptoms start showing.

The symptoms of rabies in humans include fever, nausea, anxiety, a sore throat and cough and a general state of discomfort in the early stage of the virus incubation known as the prodromal stage, later followed by aggression or partial paralysis, muscle spasms, nightmares, a general fear of water, or the production of a large quantity of saliva. A diagnosis of viral encephalitis following a bite or scratch from an animal could also indicate rabies.

The incubation period in an adult individual is 3 to 8 weeks, but in some cases the symptoms have shown as early as two weeks after the bite. Usually, by the time these symptoms appear, it is too late, death being imminent. That’s why prevention is so important, and the victim of a bite or a scratch should immediately follow the prophylactic treatment for rabies.

Animals that have been infected with rabies will often display a weird behavior, as their neurological system is being attacked. Uncertainty of movements, partial paralysis, a high level of aggression, an abundance of saliva and the classic foaming at the mouth are all strong indicators that an animal has contracted the virus.

What about your cat?

The most common signs a cat has rabies are sudden and unexplainable behavioral changes and paralysis. These two symptoms correspond to the two forms rabies can take when attacking the cat’s nervous system: furious and paralytic. Other symptoms you should be watching for are:

If you think your cat might have rabies and you are unable to get quickly to a vet cabinet or hospital, there are a few questions that will lead you to a correct assessment of your cat’s state.

Before you jump to any conclusions, you should take a look at the general environment of the cat, and consider the fact that the probability to get rabies is close to zero if she lives indoors and if she has little chances of encounter with unvaccinated animals.

This last sentence brings us to the main reason to exclude all doubt about contamination, and in the same time, the most efficient method to keep your cat and any other animal healthy: the vaccine. Of course, there is an expiration date on vaccination, but we’ll get back to that right away.

As to how do cats get rabies, the answer is the same as for every other animal: through the saliva of an infected animal, usually by bite, or the contact of the saliva with an open wound or a mucous membrane.

Cats who are free to wonder on the outside present a greater risk of getting infected. The risk is even bigger if you live in an area where she has the possibility to run into wild animals, or in an area populated with a big number of stray cats and dogs. That being said, it follows that an indoor cat presents a small risk of infection, but the possibility can never be truly ignored.

How to protect yourself from getting rabies?

We’ve been through the symptoms that can help you identify an animal that might be infected. Once you observe one or more of these signs, make sure you put enough distance or a strong enough obstacle between yourself and the infected individual. Rabies occurrences should be announced to the authorities as quickly as possible, since the possibility of outbreaks is very big.

If your own cat is manifesting these signs, you have to make sure she is quarantined until a doctor can see her. While we are used to be careful when it comes to wild animals or stranger’s pets, we often have no guard when it comes to those of our own. That’s why, if your cat belongs to a high risk category, you should always remember to pay attention to her behavior.

How to protect your cat from getting rabies

As we stated before, the best and most direct way to make sure your cat develops an immune system strong enough to fight the rabies virus is to get her vaccinated against it. If you’re a responsible cat owner you are probably already aware that in some states vaccination against rabies is mandatory. In the absence of a law requirement, veterinary practitioners usually recommend vaccinating your cat against rabies.

You can start protecting your cat as early as three or four months of age, since the kitten born from a vaccinated queen will maintain her immunity to the virus for approximately 12 weeks. The first vaccine is followed by a subsequent one, called a booster, after the first year, and later on, the cat should be vaccinated every three years, or more often, depending on the state’s regulations.

There are numerous discussions concerning vaccines in humans and animals. Some accuse vaccines to be the cause of serious illnesses, others just state they’re useless. But if you understand the mechanism of a vaccine, you know that they are not absolute cures, and that mild side effects are perfectly normal.

A vaccine practically teaches the body’s immune system to recognize and fight against certain agents. Given that every immune system is different and depends on the general health of the body, the responses to vaccination vary as well as its effectiveness. That’s why a vaccinated cat is never absolutely safe from contracting the virus.

On the other hand, there are some side effects of rabies shots in cats that you need to know about, but their intensity is in most cases very low, and they are most likely to disappear within a few days.

Most common adverse reactions to rabies vaccines in cats are:

If these symptoms persist longer than a few days, or they worsen as time goes by, it’s best to talk to your doctor. Of course, any other symptom, such as vomiting, diarrhea or difficulty breathing are assimilated to severe allergic reactions and are also good reasons to head off to the vet.

Rabies vaccines costs for cats vary quite a lot depending on the state you’re in, the clinic or practitioner you chose, and whether you are giving your cat just one vaccine, or getting her  a full package of protection against the common viruses and diseases amongst cats.

A single rabies vaccine can usually reach a price of around 17$ – 20$, but with just a few dollars more you can get, in most clinics, a full package of vaccines like FVRCP and FeLV, and get your cat dewormed within the range of 35$- 70$, again, depending on your location and the prices of your clinic or doctor of choice. Most practices, however, like to do a series of tests that might add up to the total cost another 60$-100$, depending on the test or treatment applied.

However, if you can’t afford to pay for multiple vaccines, make sure you get her the ones that are required by law and those recommended in your living area, and take into consideration that once your cat gets the rabies virus, there is no cure for it, and she will probably have to be put to sleep.

Although indirectly, another method of protecting your cat and community, for that matter, against rabies infestation is neutering your cats and other pets and help raise awareness about the importance of limiting the natural breeding process. Intact cats and house pets that breed in the wild only help produce more individuals that can be then infected with rabies. Limiting the wild population of strays will also limit the chances your pet comes in contact with an ill individual.

What course of action to take in case of a scratch

If you sustained a scratch from a cat you suspect might have rabies, you have to act very quickly. Wash the wound, no matter how superficial it seems, with warm water and soap, apply an antiseptic to it and head straight to the doctor’s office.

As we stated before, the symptoms are almost always followed by rapid deterioration and death so you need to be ahead of them. If your diagnosis confirms, you need to bring your cat (if it was she who bit you) to the attention of the health department in your area.

If your cat is the one who gets bitten or scratched, depending on whether she was vaccinated or not, she will rest in quarantine for at least 10 days in most countries.

Vaccines and indoor environments for cats can reduce a lot the risk of your precious ball of fur getting infected, but no method is 100% certain to prevent you or your cat from contracting the virus. Therefore, the answer to the question can you get rabies from a cat scratch? is “yes, you can”.

But before panicking and assuming the worst will come upon you, take the measures we discussed: neuter and vaccinate your cat, try to discourage the number of stray animals in your neighborhood,  try to limit as much as you can the possibility of your pet coming into contact with wild animals. And most importantly, keep your cat healthy so that her immune system can fight upcoming dangers: by protecting her, you are protecting yourself and your family.

0 comments on “Can You Get Rabies from a Cat Scratch?”